Race week was full of rumors, talk and speculation of changing the race from a full 140.6 miles to a modified version. I was disappointed to even hear talks of shortening the race because of all the hours and energy we put into the training, especially those who were doing their first IRONMAN. Throughout the week, I just stayed focus on what I could control, getting myself ready for the race, no matter what the distance might be. 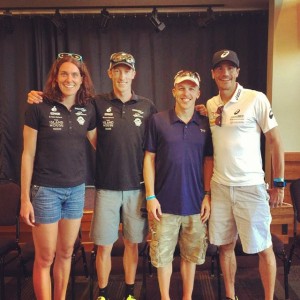 After attending a Pro Meet and Greet with Andy Potts and the Wurteles, the race director assured us that they were going through with the full race! I’ve never had any issues with racing in the heat and I’ve had some good experience racing IRONMAN Wisconsin a few times in 90+ degree weather with humidity.

Race morning started an hour earlier (5:45am) due to the forecasted high temperatures of the day. The morning was perfect; calm waters and reasonable air temps. I checked over my bike and gear bags then headed down to the water. I got a quick warm up in then made my way into the starting corral. They had signs with different estimated finish times. I lined up with the “Under 1 hr” group, about 5-6 rows back of the front line. The pro men went off 15 minutes before us, followed by the pro women 5 minutes after the men. 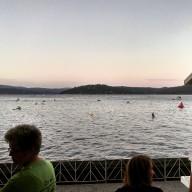 Swim: The gun went off and the rolling start began. The first 300 yards were the most physical of any race I’ve ever been in, including Kona. I was elbowed and kick multiple times before things settled down a bit. I began to settle into my race pace, but started dealing with some small anxiety issues about 600 yds into the race. I did my best to try and get out of my head and just focus on swimming. The anxiety got me a bit out of my groove and I watched as many swimmers began to pass me. 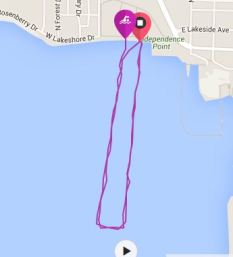 After I reached the shore on the first loop, I looked down at my watch and saw 29:30, just under pace for an hour swim. I knew if I swam well on the 2nd loop I could do it. I found myself all alone on the second loop, searching for feet to draft on, but there was no one to be found. My pace suffered a bit and I came out of the water with a 2nd split of 32:22 for a swim time of 1:01:52. This put me in 18th place in my AG and 155th overall, not the best start.

T1: I was happy to get out of the water, but a little disappointed in me time. I knew I had to block that out of my mind and just run the rest of my race as planned. I stripped off my TYR Freak of Nature wetsuit and cruised through transition with a time of 2:19.

Bike: After talking with my coach the day before, the plan was to drop my wattage goals by about 10-15 watts due to the heat. I should have listened to my coach. The first loop of the bike I was feeling great and flying on the course. 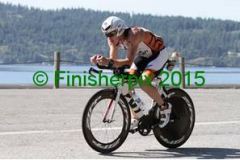 I began passing age groupers, professional women and even some professional men. By the start of the 2nd I estimated my position based off the number of bikes I saw before the turn-around. I knew I was top 20 overall and somewhere in the top 3 of amateurs. My NP for the first loop was 240 watts (about 10 watts more than I had planned), I paid for it on the 2nd loop. I began to struggle with a head-ache and stomach ache. I thought I was staying on top of my nutrition, but looking back I may have been dehydrated. 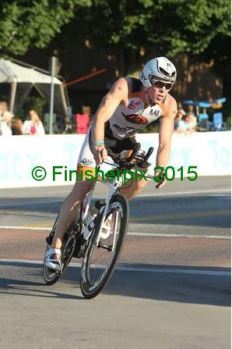 My nutrition plan was simple, I had 3 bottles of INFINIT nutrition with me on the bike and 2 more in Special Needs. I grabbed water as needed at aid stations. I struggled home on the 2nd loop, waiting for people to pass me, but they never came. With about a mile left in the bike I got caught behind some slower riders on a no-pass zone and a pack of 3-4 guys caught me, we all entered transition together. After the bike I was 1st in my AG, 18th overall and 2nd amateur with a bike split of 4:55:51. That was good for the 17th fastest bike split on the day.

T2: Coming into T2, I knew that there was 3 guys right behind me. We all joked in the change tent about the heat as we put on our shoes. I had a quick transition, grabbing my visor, shoes and Nathan Speedraw-Plus. My T2 time was 1:36.

Run: Getting out on the run, I knew I was first in my AG, but I wanted more. I knew the overall amateur leader was within reach on the run. Much like the bike, my coach and I discussed dropping my effort due to the heat. He speculated that at 3:20-3:30 marathon would be sufficient enough to take home my AG title. (He was right and I should have listened). I came out of T2 pretty hot (literally and figuratively) running sub 7-min pace. Once I was exposed to the heat, now over 100+ degrees, I planned to walk through all the aid stations. I took in water and poured as much over my head as possible.

My splits began to drop as I walked more through the aid stations. I was passed by another athlete around mile 4. I stayed right behind for the next part of the race. It was good to have someone to motivate me and pace off of. Once we reached the big hill for the first time we were able to see the amateur leader, less than a mile ahead of us. At this point I was still feeling optimistic about my chance to catch him. The race began a death march, running from aid station to aid station. Water was sacred and hoses and sprinklers were lifesavers. 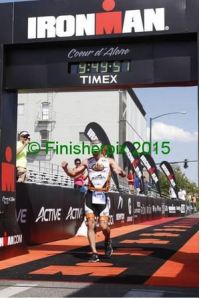 Once I got to the turn-around I was passed by another athlete, which put me in 4th place amateur. I did my best to keep pace, but fell back into my death march. I went through some mental battles on the run struggling at times and beginning to walk. I walked the whole hill at mile 19 which was pretty crushing to my ego. At the top of the hill, one of the female pros, Dr Amanda Stevens passed me and said just keep moving Eric. It was just the push I needed. I was able to suck it up and run the rest of the race. I even managed to FINALLY pee at mile 22. With less than 2 miles to go, I saw the 3rd place amateur up ahead. I mustered up all the energy I had left and passed him. As I turned onto Sherman Ave, I was at a loss for emotion. The sun and heat had sucked it all out of me. It was a very anticlimactic finish amongst the empty bleachers. There was 1 smiling face at the finish line, my dad, holding a sign saying “I Love You.” My run finished in 3:33:11 finishing 1st in my AG, 16th overall, and 3rd amateur. Overall time of 9:34:49.

After thoughts: Why didn’t I just listen to my coach! I’m happy with the overall results. I accomplish all of my finishing goals, except getting a PR. I won my age group and finished in the top 3 of the amateur race, which means I can take my pro card at the end of the year, if I choose to.

What’s Next: After taking a week off of training I’m ready to get back at it. Next up are a few tune up races before IRONMAN Wisconsin and Kona. I’ll be racing Toughman Minnesota later this month, AG Nationals and Pigman 70.3 in Iowa.

Thanks for all the support!