Louisville, KY (October 13, 2019) – In the home of the Louisville Slugger, I was able to end my year on a walk-off home run! It was definitely a risk doing another full-distance IRONMAN race after IRONMAN Wisconsin, but I really wanted to end my year on a high note. I was extremely disappointed with how I fell apart on the last half of the run at IRONMAN Wisconsin and knew I had a better result in me.

Pre-Race: As everyone knows now the swim was cancelled for this race. Obviously it is disappointing not to be able to do a full IRONMAN race, but it was definitely the right call. The algae bloom was really bad and it wasn’t safe to swim. With the swim cancelled, everything was pushed back an hour or more. The swim is usually one of the most nerve racking aspects of the whole day, so I was eerily calm on race morning. I was able to sleep in a bit and took my time packing my bags and heading over to transition.

Cold temperatures meant bike clothes/ear was going to be a significant factor on how your day would go. I decided to go with the following: bike socks, arm warmers, bike gloves and hand warmers inside my bike gloves. The temperature was close to 40 degrees at the race start so its actually a good thing there wasn’t a swim or it could have made for a very chilly ride.

I got my bike all set up with my nutrition and set off on a brief 10 minute jog. Since I signed up so late in the race, I didn’t have my typical All-World Athlete bib number (which is usually a low number in the 100’s or so). My bib for this race was 2312. This was important because the bike start would be a time-trial start by bib number. Luckily for me, they let the AWA people who signed up late to start after the rest of the AWA athletes. This meant I would start about 30 minutes after the first rider and about 500th on course.

Bike: It was a weird feeling to jump on the bike without swimming first. By this point in the race usually my heart rate is high and my body is ready to tackle the 112 miles. With the 40 degree weather and no swim, it definitely took a bit to get warmed up on the ride. 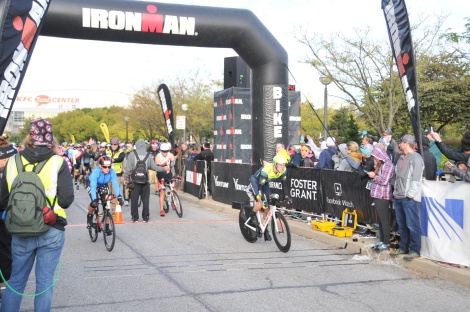 Since I started out the bike about 500 people back, I knew there would be a lot of bike traffic throughout the day. The first 10 miles are dead flat and I probably yelled “on your left” over 100 times. Most people throughout the day stayed towards the right side of the road, but there were a few close calls with people fumbling with nutrition or just not paying attention.

The first 20 miles I benefited from a tailwind but I knew that meant most of the day would be spent pushing into a headwind. By the first bike checkpoint (mile 28) I was 2:15 back of first place. I knew a few people who were out spectating that were able to give me occasional splits throughout the ride – but it was tough with the staggered start to know where I was really at.

One of the big mistakes I made at IRONMAN Wisconsin is I pushed the first 3 hours of the bike ride wayyyy too hard. My power average was similar to that of some of my 70.3 races, which is not good when there’s still 2 hours to ride plus running a marathon. I held back on the first hour and hit my power numbers perfectly. The second hour I got a little too aggressive and maybe pushed a little too much, but was able to bring it back down by the 3rd hour.

It was a 2 loop course with rolling hills. The bike elevation is very similar to IRONMAN Wisconsin but its a much less technical course and the hills are more rolling in Louisville. Pre-race, I estimated it was about 10 minutes faster than the IMWI course. 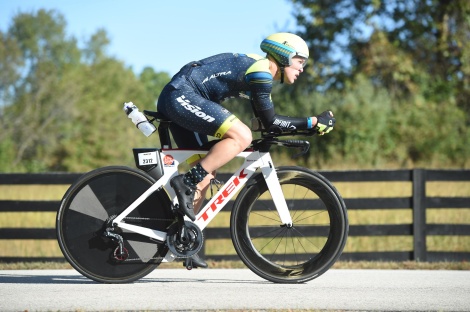 Another challenge with the cooler weather and time-trial start was nutrition. During the early portions of the bike I had to force myself to drink. I have a timer set on my Garmin bike computer to remind me to take in my custom INFINIT Nutrition blend every 10 minutes. I started the ride with 2 concentrated bottles (about 700 calories each) that would last me 4 hours in the ride. I decided to skip special needs as it was a bit off the course and I knew I would lose about :30 to a minute by stopping.

The last hour was tough. I was riding solo into a headwind. This is where the mental battle of the day begins. What happens when you “plan” starts to get away from you. My power had dropped by 20 watts and I found myself coasting the pedals any chance I had. I kept thinking to myself how much time I was losing to the front of the race every time I sat up or stopped pedaling. The last 60 minutes creeped by, but finally I could see the city skyline ahead and knew I only had about 3 miles left to ride. 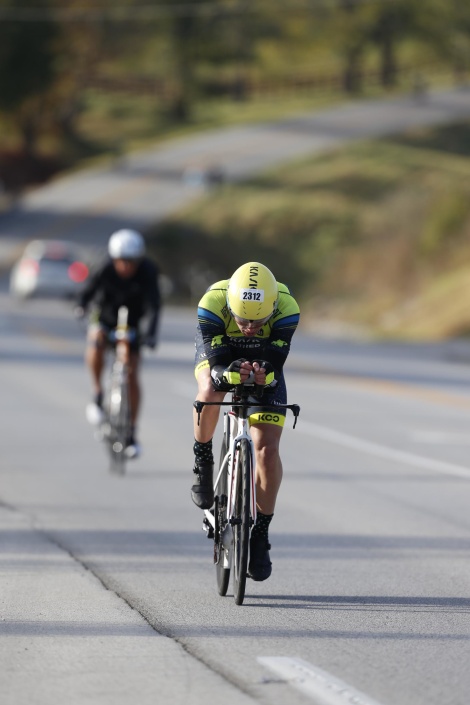 To be honest at this point, I was considering dropping out of the race. Before signing up for this race my coach and I both agreed that if I started doing unneeded physical damage to myself during the race I would pull out. This wasn’t physical it was strictly mental. I came to this race to win and I thought that had slipped away from me. My head wasn’t in a good spot coming off the bike.

T2: I did a flying dismount into T2 and began to slowly jog with my bike. With my mindset where it was at, I wasn’t pushing my T2 pace like I usually do. I pride myself in quick transitions, but this was not going to be one of those. Once I got to the change tent I sat down and just started going through the motions – socks, shoes, race belt, hat and go!

Run: I came out of the change tent and set off on the 3-loop, 26.2 mile run. I was still mentally battling myself about finishing the whole thing, but decided to give it a go.

I decided not to run with my hand held nutrition bottle and to just use what the course had available. My nutrition goal for the race was to take in as much water and sports drink at every aid station and to take a gel and salt at every other aid station. 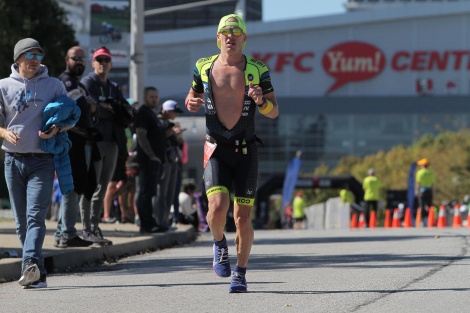 Before mile one, I saw a familiar face and he asked me if I wanted a split. I hesitantly said yes. He said I was only 1.5 minutes back of the lead. Honestly this change my whole day. My mindset instantly switched from dropping out to “hey you can still pull this thing off.” I knew it was going to take a solid run since it was pretty flat course, perfect run conditions and there were some fast guys toeing the line.

Before the race, I didn’t think I’d be a big fan of the 3-loop course but it actually turned out to be a benefit to me. I was able to break the race down into more segments. Plus, I was able to see some pretty awesome spectators a bunch of times (thanks Steve, Dani, Lauren, BBMC crew, and everyone else).

The first 8 miles clicked off easy. I was trying to hold back a bit, but my body felt really good. I was running 6:35-6:40 min/miles consistently with a relatively easy effort. By the end of the first loop I got the update that I had taken over the lead and was putting time into people behind me. This was definitely going to be my race to win or lose. 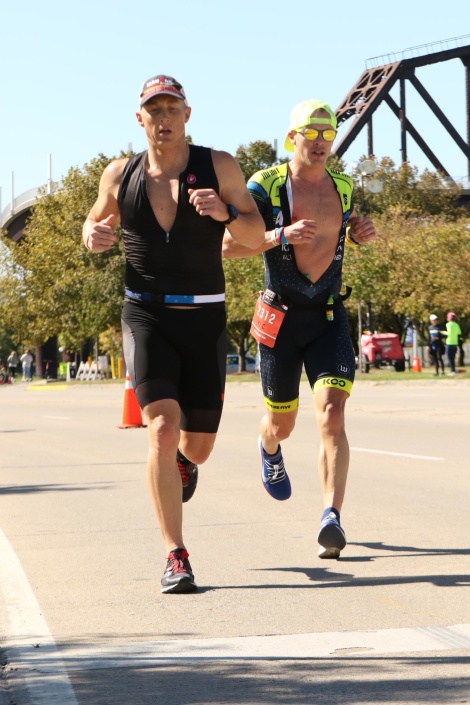 I started the 2nd loop and was still feeling pretty good. I stuck to my nutrition plan, but knew that I wanted to start adding coke at every aid station as well. Around mile 15 things started to tighten up. The body and the mind were starting to fade a bit. My pace began to drop and I had flashbacks to IMWI where I squandered a 11 minute lead at the 13.1 mile point of the race. I saw my coach and he told me to take a half mile to take some deep breaths and get things sorted out. I had 10 miles to go and I honestly didn’t know if I was gonna be able to get through them.

Running through the first aid station of loop 3, I decided to grab a banana. Boom, the fog started the clear and the body started to respond. I was able to find some rhythm again. I snapped out of my funk and was able to get back into a steady pace, not as fast as before, but close to 7 minute miles. My goal now was to take on as much nutrition in each aid station and be sure to grab a banana whenever possible. I knew if I could hold 7 minute miles it was gonna be hard for anyone to beat me. 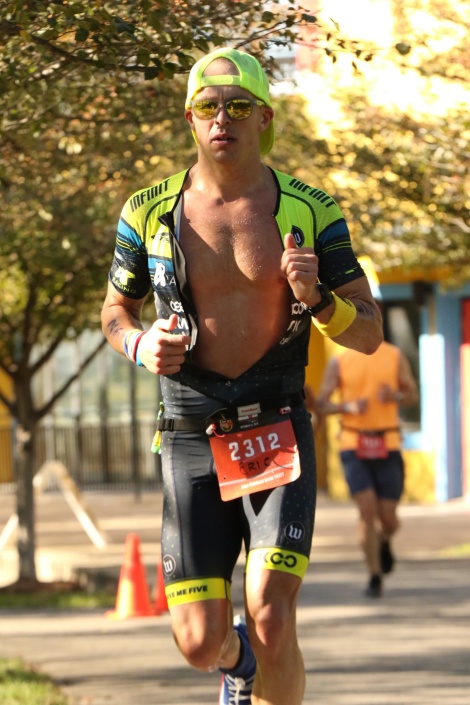 I finished loop 3 and started to make my way towards the finish. There was a long stretch of road that was absolutely desolate and a slight uphill. I willed my body to keep going and made the final turn towards the finish line. Someone yelled at me to push it because there was an athlete who started after me that was gaining time on me.

I don’t know how, but I started sprinting. I ran by a buddy of mine right before the finish and the  IRONMAN team quickly pulled the banner across the finish line. I gave the double fist pump and let out a yell. This is why I came here. Mission accomplished. Well hopefully. There was a tense 10-15 minute wait to make sure it was official, but I was finally able to relish in the moment. I ended up having the 3rd fastest run on the day to back up the 4th fastest bike split. 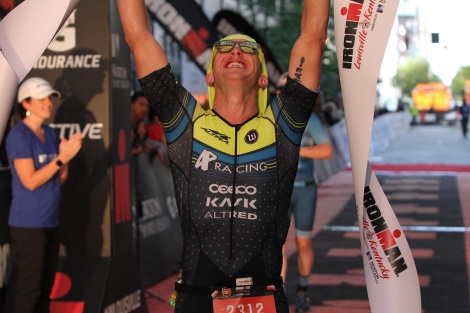 Overall: Obviously I’m very happy with the outcome of the race. Honestly, I wasn’t quite sure how the day was going to go. My training after IMWI had been a little shaky and inconsistent, but I think I should up to the start line a little less fit, but much more well rested. I was pumped to finally get my sub 3hr marathon off the bike – makes me wish we had the swim because I probably could have gone under the 9hr barrier.

Now its time to recover and relax. I finished the year with 3 overall wins – 70.3 Wisconsin, 70.3 Ohio and IRONMAN Louisville. I’m still working out the race schedule for next year but I’ll definitely be back to defend my 70.3 Wisconsin & Ohio titles. Oh and don’t forget about the other little races I have scheduled; IRONMAN World Championships & 70.3 World Championships! Next year is going to be a big one!

Thank you: A huge thank you at this race to my coach Will “get jiggy wit it” Smith and his lovely wife Mari. You might recognize him as the Normatec guy – helping athletes recover before and after races. He let me stay with him in Louisville and has helped make training and racing fun again! Looking forward to our first full year together in 2020. 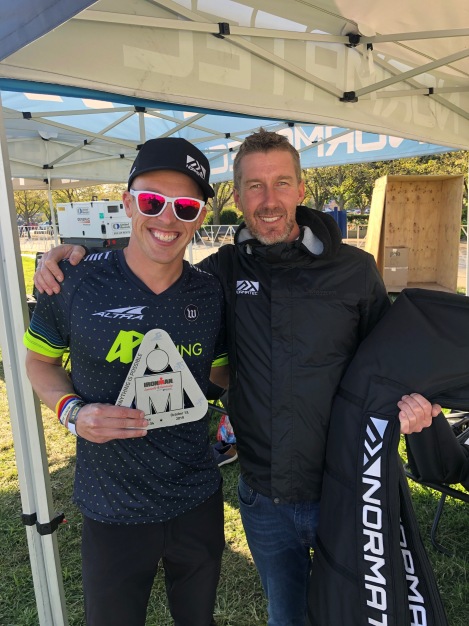 Thank you to a few of my sponsors: INFINIT Nutrition, Peak Performance Massage, AP Racing and Life Style Staffing!

Thanks to everyone for the support this year. You have no idea how much the texts, messages and support means to me. It keeps me motivated and hungry for more! Cheers! -E