After my second or third IRONMAN, I set out to complete 10 full IRONMAN distance races before I turned 30 years old. Sunday marked my 10th IRONMAN as I competed at IRONMAN Louisville. 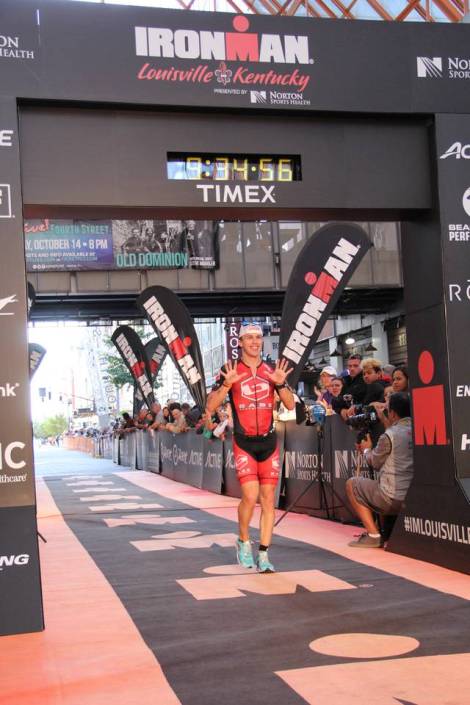 Pre-Race: The IRONMAN Louisville start is a unique experience. It is a time trial start which means the sooner you get in line, the sooner you start. We got to the race site at 4:30, 1 hr before transition opened. There was already a line just to get into transition. We made camp and sat down in the line.

At 5:30 we got into transition and were able to pump up our tires, add our nutrition and check on our transition bags. After getting my bike set up, we had to walk .8 miles to the swim start. We walked about a half mile before finding the end of the line. Wow, people were there early! We sat down and began to wait. We still had almost 1.5 hours till the race started.

Swim: When 7:30 hit, the line started to move forward. They had us be “race ready” as we crossed under an inflatable arch. At this point, we had our goggles on and ready to go. 10 minutes later, we were still in line. We finally made it down to the docks, they had 2 separate docks you could jump in from. I crossed the timing mat and jumped in off the further dock into the river. 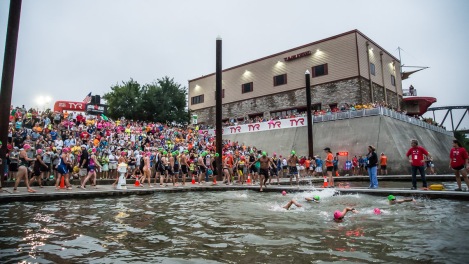 As soon as I jumped in, my goggles immediately fogged (the temperature difference between the air and the water was significant). I began swimming upstream, holding a line closest to the island. Due to the time trial start, many slower swimmers start out in the front, which made for a lot of early passing. I made my way through the packs of swimmers, fogged goggles and all. 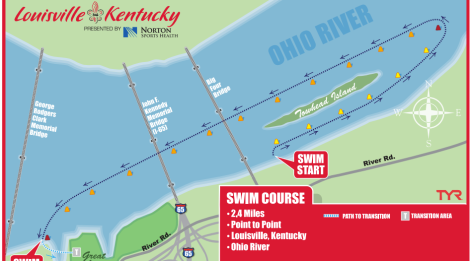 As I approached the turn around point to head down stream, I took a second to slow down and clean my goggles. It was like day and night, I should have done it sooner! As I headed down the river, I knew the middle of the river had the strongest current. It was a really wide river, so the athletes were very spread out. I found a good rhtym and stayed a little bit inside the buoy line. This allowed me to avoid having to swim around any slower athletes.

I stayed relaxed throughout the swim and focused on a smooth and steady stroke. As I approached the swim exit, I sighted the stairs and made a line for the group of brightly colored volunteers (Swim: 55:24, New PR) 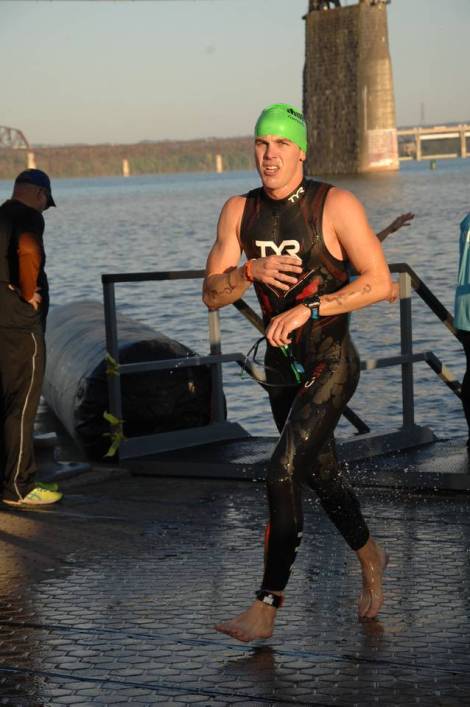 T1: The volunteers practically pick you up out of the water and place you on the stairs. I pulled off my goggles and cap and made my way to the strippers. Off with the wetsuit and I was headed to grab my bike bag. I found my bag, grabbed my helmet and handed off my wetsuit to the nearest volunteer. During this my helmet visor fell off so I would be without any eye protection during the bike. I found my bike and made the long run to the mount line (T1: 3:10)

Bike: The first 20 miles of the bike were relatively flat, but boy were they cold! There was a lot of tree cover, which blocked the sun. I was shivering cold until we made it out of town and started the 2 loop bike.

With the time trial start, I had no idea where I was in the field so I just wanted to stick to my plan and execute. The Louisville course was great! It was a lot of ups and downs with some very fast and not too technical downhills. I made my way through the first loop of the bike course feeling great.

The second loop brought on the biggest challenge of the day, the first loop bike traffic. The entire field was spread out so far that people were just begninng the first loop when I started my second. I think I probably yelled “on your left” over 100 times that day. There were a couple close calls with lapped traffic and cars, but nothing too out of the ordinary. 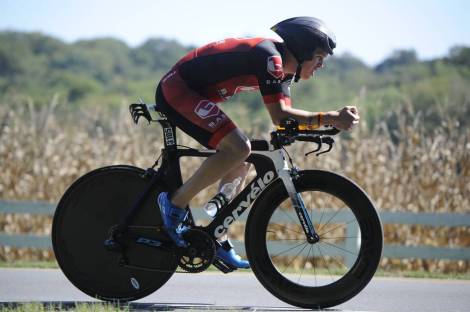 My nutrition was on-point, taking in 3 bottles of INFINIT Nutrition, not needing to stop at the special needs tent and only taking in water at aid stations. I knew my nutrition was clicking because I was able to pee three times during the bike (mile 40, 70 and 95).

The last 20 miles were flat and we were supposed to have a tail-wind. I started feeling the fatigue from IRONMAN Wisconsin in my legs coming back into Louisville. I was passed (for the first time of the day) on the last 15 miles of the bike. I struggled home back into the town of Louisville, holding about 35-40 watts lower than my goal wattage (Bike: 5:00:23,

T2: I couldn’t wait to get off my bike. I dismounted and ran it (what felt like a mile) to the transition area. A volunteer grabbed my bike and I went to get my T2 bag. I grabbed my bag and headed into the change tent. I put on my run gear and headed out to begin the run (T2: 3:30)

Run: The run. My nemesis of late. The Louisville course was dead flat. The only hills consisted of a few roads going under some train tracks. I set off on the run, trying to hold back. I clicked the first 3 miles off at 7:00 min/mile pace.

I took in BASE salt along with my nutrition every mile. Once I got to mile 6, I assumed the turn around would be coming up at 6.5. I should have looked closer at the course map before the race. The turn-around came much later, ending a slight uphill. I could see the leaders on the course (not necessarily the race leaders due to the time trial start), they were about 2 miles ahead of me at this point. My goal was to run into 3rd position on the course so that I could have a lead biker with me.

That wasn’t going to happen. After mile 10, I never saw a mile faster than 7:30 the rest of the day. My body wasn’t having it. I tried everything; coke, red bull, napalm, gatorade, and even HotShot, but nothing seemed to help. My Garmin died about the time my legs did, mile 12. I didn’t care though, because I’d rather not see the slow splits.

I spent the rest of the run just trying to get mile to mile. Take care of myself and keep focusing on my arm swing to encourage my legs to move faster. The last 3 miles I felt like I was dragging a tire behind me. A few athletes passed me, but there was nothing I could do.

I came down the finish chute (awesome finish line by the way), trying to smile. I held up 10 fingers as I crossed the finish line and waved to friends and family on the live stream back home. The announcer was taken back my “new” profession I listed. I put Plumber down as my career when I registered, because why not. (Run: 3:21:55, 7:42 min/mile pace)

Overall: Well it wasn’t the day I had planned, but I have to be happy with a PR and an 11th place finish. I tell myself, if I can finish 3rd or 11th on an off day, then imagine what I’m capable of when I’m running on full cylinders. Congrats to everyone who raced, shoutout to my teammate Tyler LeRoy for taking the overall win! (9:24:17, New IRONMAN PR, 5th AG, 11th overall)

Thanks: Thanks for all the support and for everyone who entered the BASE Performance and 2XU contest! Thanks to my coach and teammates for keeping my motivated, to my family for putting up with me and supporting me, and to everyone else for all the support throughout the 2016 season. Thank you to all my great sponsors who always get me to the start line with the best equipment and tools to race! Thanks to Endurance House, Rudy Project, Cervelo, ENVE Composites, INFINIT Nutrition, Borah Teamwear, Superfeet, Peak Performance Massage, Cycleops and Newton Running! 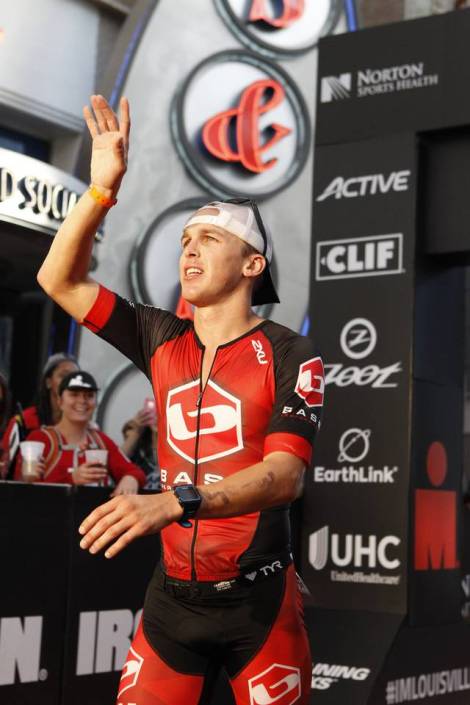 Up next: It’s time to rest up and start planning the 2017 season. Its gonna be a jam-packed season and I’m excited