Two years ago, I was signed up to run in the 2014 Phoenix Marathon. My goal was to qualify for the Boston Marathon. 10 days before the race, I suffered a stress fracture in my left foot. It was hard sitting on the sidelines and watching the race, but it kept me hungry. Two years later, I signed up again and made it to the start line healthy.

After a long year of IRONMAN racing, I wanted to improve on my run discipline and build some confidence in my run. Over the last few months, I have focused on my run, slowly building up my endurance with a lot of easy runs at heart rates below 145 bpm. It was really hard to force myself to run a lot slower than I wanted to, but my coach, Blake Becker, assured me to trust the plan.

Race Week: Race week started off with a flush-out massage at Peak Performance Massage in Madison. I hadn’t gotten a massage since late October, so I was overdue! It was painful, but it got my body feeling great before the race. I arrived in AZ on Thursday night, 2 days before the race. AZ has currently been experiencing above average temperatures for February (upwards around 80’s and 90’s). I went for a run and my allergies hit me hard. Coming from a frozen Wisconsin to a blooming Arizona reeked havoc on my sinuses. My 30 minute easy run the day before the race was frustrating, I wasn’t feeling it. I did more walking than running. Besides picking up my packet, I spent the rest of the day inside, resting and hydrating. 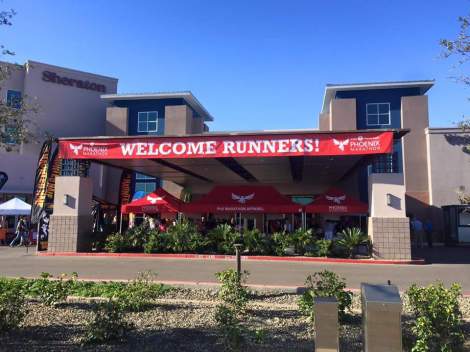 Pre-Race: Race morning I woke up at 3:45am, beginning with a typical breakfast of oatmeal and bananas. Morning temperatures were in the 50’s, which was “cold” for the Arizona natives. We took a bus out the race start. The race had bonfires and heater lamps at the start line. Fireworks shot off during the National Anthem and again once the gun went off.

Miles 1-4: The first 4 miles of the race were all downhill and easy. I knew it would be easy to start off too fast, so I kept an eye on my pace and kept it around 6:25 min/mile. 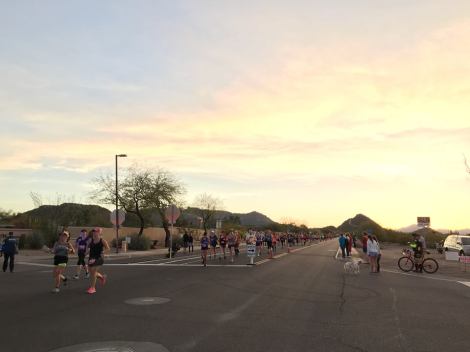 Miles 5-6: The first test of the day came at mile 5. It was a gradual uphill for .75 miles. Instead of worrying about my pace, I kept an eye on my Heart Rate, keeping it below 170. There were quite a few other runners who passed me during this point, but I knew that being conservative would pay off later. Mile 6 all but made up for the uphill during mile 5. I ran my 2nd fastest mile of the day.

Miles 7-10: I’ve prided myself in never having to stop at porta-potties during a race , but around mile 7, a rumbling started in my gut. I had to pull off the course and use the bathroom, and no, it wasn’t just a pee break. The pit stop threw me off a bit, but I was determined not to let it effect my race. I pushed the pace a little bit to make up a bit of the time lost in the porta-potty. As I did earlier in the race, I kept my watch display on my Heart Rate instead of my pace. I kept it right at 165 bpm which was around 6:20-6:30 min/miles.

Miles 11-13: I took a gel at mile 3, 7, and 11 along with water and Gatorade at each aid station. I was feeling great after the bathroom stop earlier and kept my HR right around 165 bpm. I passed under the halfway point, just under 1:26, which was pace for a 2:50 marathon.

Miles 14-20: After passing the halfway point, I knew I had a chance to run close to a 2:50 marathon if I could be smart and hold my paces. At mile 15, nature came-a-calling again. I had to pull off and use the porta-potty for the 2nd time. Another quick stop and I caught back up to the group I had been running around for most the race. I was still feeling great coming into mile 20, holding my HR at 165. I knew after that point, I could push the HR a little bit more and take some chances.

Miles 20-23: While other runners started to fade, I was just getting going. I picked up my pace a bit and kept the heart rate right at 175 bpm. There was quite a bit of traffic from the Half Marathon that we had to navigate through. A spectator yelled out that I was in 14th place around mile 18, so from there I was able to keep track of where I was. One-by-one I crept up to 9th place, and I could see 8th place just ahead. Mile 23 is where the legs started to burn.

Miles 24-26.2: I caught the 8th place guy at an aid-station, but once he saw me, he kicked in another gear. We raced each other side by side for a mile and I fell back a few strides. Fighting through the pain, I made one more push, but it wasn’t enough. I came in 9th place, about 30 seconds back of 7th and 8th at 2:46:55. This was a 22 minute PR for me in the marathon distance and my first Boston Qualifier.

Thank you: I want to say thank you first and foremost to my host family, John and Karen Heinz! Thank you so much for opening your doors to me for the weekend! Thank you to my coach and teammates for pushing me these last few months during the winter. Thanks to my great sponsors: Newton Running, Endurance House, Superfeet, and INFINIT Nutrition. 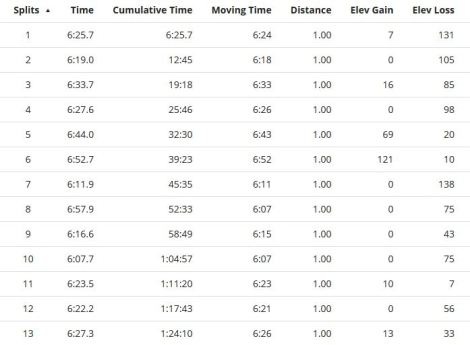 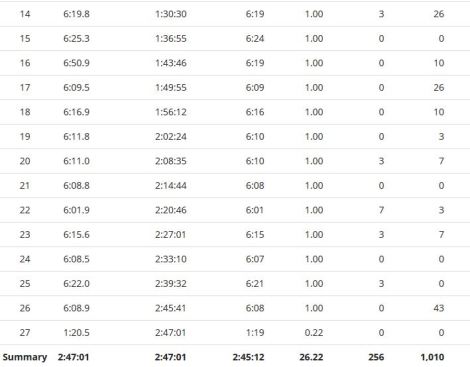