Coming into the weekend, I wasn’t sure what to expect at the Pigman Triathlon. All I knew is that there was going to be a fast field and a hot course. The course was adapted this year to feature a “spectator friendly” course with multiple loops on the swim, bike and run courses. The elite field consisted of multiple Professional triathletes as well as plenty of fast age groupers. A great recap of the starting field was provided by Minnesota Tri News.

I knew that I would be a few minutes back out of the water, so my plan going into the day was to try and make up the gap on the bike and see if I could still run off of it. The race paid out to the top 5 overall finshers, my goal was to bring home some bacon. Here’s how it went…

Swim: As I expected, the announcement was made on race morning that it would be a non-wetsuit swim. The water temps were at 81 degrees, much like a health club pool. I was fortunate to have my TYR Torque Pro swim skin that I could wear for the swim. The Torque suit was by far the most popular suit in the elite wave, probably because it is the fastest suit around!

At the start line a few of the guys in the elite wave had some questionable skins on, some below the knees and others that were from the now illegal speed suit days of collegiate swimming. At an event like this, it’s hard to regulate what suits are worn.

Anyways, on to the swim. The elite wave went off and as usual, I was up towards the front at the first buoy. Just as I’m usually up and the front at the beginning, I always fade a bit from the field. This race was no different. I got over-heated a few times, but just kept my pace and stroke. I came out of the water in just over 30 minutes, 11th in the elite wave and about 4 minutes back of the leaders (David Thompson, 26:31). Swim – 30:19, 1:26/100yd, 13th overall swim split 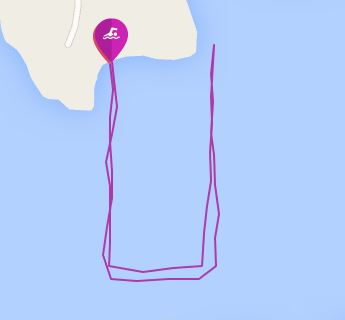 T1: Transition was a run up the beach, with a long run through the narrow transition area. I threw on my Rudy Project Wingspan, Tifosi glasses and ran my bike out. I mounted and was off to catch the leaders. T1 – 1:34, 4th fastest T1 split

Bike: The bike course included 4 loops of an out and back course. Before the race, I thought the lap traffic congestion might be a problem, but it worked out pretty nice. It was beneficial being able to see the leaders at each turn-around and know where you were at. 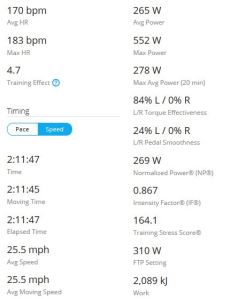 Loop 1: I pushed hard. I knew I was 4 minutes back and I was in 11th place in the elite wave. In the first 5 miles, I passed 3 riders, which put me in 8th place. I wasn’t going to back off until I was in the top 5. My first loop was the 2nd fastest overall.

Loops 2-3: The next two laps I didn’t let off the gas. At times I was pushing about 15-20 watts above my typical 70.3 average. On the hills, I was aggressive and rode hard out of the saddle. I had the fastest splits for loops 2 and 3 which put me past 4 more riders. I could see the leader (Blake Becker, my coach) and his 2nd place shadow on the bike. At this point I had gone through about 1.5 bottles of my INFINIT Nutrition custom blend, drinking and pouring water over my head as needed.

Loop 4: At the end of loop 3, I started to feel my legs hurting a bit, but at this point I had moved up to 4th place overall. I pushed my wattage trying to catch the leaders, but they kept the a 2 minute lead on me heading back in transition. Bike – 2:11:45, 25.5 mph, 2nd overall bike split

T2: I was nervous coming into T2 after pushing the bike harder than I ever have in a race. I threw on my Feetures socks, Brooks Pureflows, Nathan handheld (filled with INFINIT). T2 – 1:08, 10th fastest T2 split.

Run: The run course also consisted of 4 T-shaped loops. There were only 2 aid stations on the run which we hit multiple times on every loop, but with the heat, there could have been 1 more. 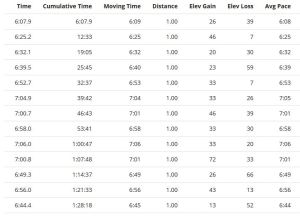 The first mile I was feeling great, that was also the LAST mile I felt great. My splits began to fade as my legs just didn’t have any juice after the bike and not being tapered at all. I managed to hold 7-minute miles for a large majority of the race, falling back from the leaders and eventually getting passed by 2014 IRONMAN Wisconsin Champion, Daniel Bretscher.

I manged to shuffle in to the finish hanging on to 5th place and taking home $150. The real race was up front, where my coach Blake Becker ran down the leader to win the race by :40 seconds. I enjoyed watching the mental strength showed by my coach, it’s something I look forward to learning from him. Run – 1:28:52, 6:47 pace, 10th overall run split

Overall: I learned a lot from this race and I had some fun chasing my coach on the course. It was a good final race tune up before IRONMAN Wisconsin next month and Kona the following month.  Congrats to the other guys on the podium as well as the Danis, Dani Fischer and Dani Vsetecka on their 1-2 finish yesterday. Fischer is a fellow Badger and Vsetecka is coached by my former Coach Joe Moyer out of Rochester, MN. Overall – 5th overall, 4:13:36 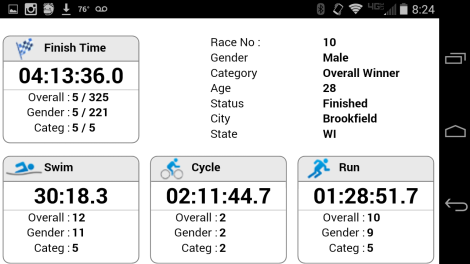 Thank You: Thank you to my sherpa and father for making the trip down with Katelyn and I, as well as her parents and grandparents! It was great having familiar faces out in the crowd, especially on a 4 loop run course. Thanks to my coach and teammates out on the course, both racers and spectators. Thanks to my sponsors, Endurance House, TYR Sports, INFINIT Nutrition, Rudy Project, Feetures, Superfeet, Peak Performance Massage, and Team BBMC. Thanks for all the support to everyone out there on Facebook, Instagram and more! It means a lot and keeps me going in those last few miles of the run. 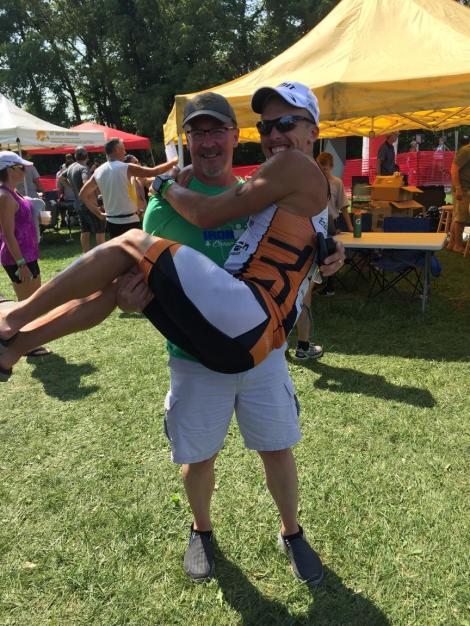 As some of you may know, I lost my job the week after IMCDA and along with that my $2500 sponsorship for Kona. My sponsors stepped up and provided a bunch of awesome giveaways for anyone who wants to help sponsor me for Kona this October. Incuding my $150 purse from this race, along with corporate and personal sponsorships, I’ve raised over $1k so far. Check out the link here: http://www.gofundme.com/back2kona 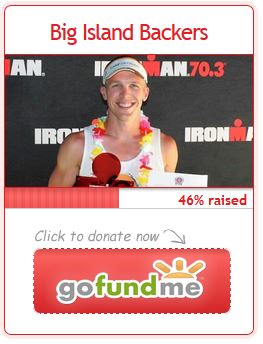