Wow. Where do I begin. I’ve had a dream for the past 6 years of one day qualifying for the IRONMAN World Championships in Kona, HI. This past weekend at IRONMAN Coeur d’Alene, I took the next step on my way to fulfilling this long-awaited dream. With a time of 9:36:43, I finished first in the Men’s 25-29 Age group and qualified for the IRONMAN World Championships this October.

Lake CDA before the swim

Pre-Race: The alarm went off at 3:30am on race morning. Breakfast consisted of oatmeal, 2 bananas and some orange juice. I got to transition around 4:30am and immediately took my bike to get my tires inflated,105 psi in the front and 110 in the back. Next, I checked on my gear bags and mapped out where my bags were in relation to the different entrances and exits of the transition area. The set-up of this race was a brand new experience for me. I’ve gotten used to the luxury of using the Monona Terrace in Madison, WI for my past 3 IRONMAN races. For the next hour we sat near the swim start and watched the waves crashing on the shore from the strong winds. I knew the swim was going to be tough under these conditions. The water temp had also dropped to 61 degrees overnight. The pros started at 6am and we were set to start at 6:40. I did a quick 5-10 minute warm-up in the lake to get used to the temperatures and the waves. My nerves and anxiety were on high alert as we positioned into our starting corrals for the swim. I lined up in the 60 minutes and Under corral. 3 minutes to go. The lined us up at the start line, there was a quiet calm before the race as all the competitors around me were mentally preparing for their race.

Start of the Swim

Swim: The cannon went off. I ran in the shallow water and did a few dolphin dives before settling into to my stroke. I began swimming near the inside of the buoys, battling the waves and other competitors as we tried to sight the course. It was a tough first loop, but nothing I hadn’t done before. I looked down at my watch after coming out of the water on the first loop. My watch read 30:14, right where I wanted to be for a 1 hour swim. As soon as I started the second loop I could tell the wind had picked up. The waves seemed stronger and more sporadic. At times it felt like a washing machine as I was picked up and dropped by waves. I kept on going, at times slowing down to re-orientate myself with the buoys. Finally I made a turn for the home stretch and came out of the water at 1:04:04. According my to Garmin, I swam 2.66 miles. Oh well. I finished four minutes back of my goal and which put me 14th in my AG, but still a respectable time for the conditions.

T1: We ran up the beach into the T1 area. I was still dizzy from the spin cycle of swim we just encountered. The wetsuit strippers were amazing like always and I ran right to my bike gear bag and headed into the change tent. I put on my shoes, helmet and sunglasses and headed out towards my bike with a quick pit stop at the sun screen station. At last I made it to my bike.

Heading out on lap 2 of the bike

Bike: The bike was going to be my strongest leg of the day and I had a great plan worked out with my coach. Including transition, I passed almost 70 people in the first 7 miles of the bike course and had moved into 8th place in my AG. Once out of town we got onto a 20 mile out and back stretch of highway. This is where things got interesting. There was a strong headwind the whole way out. I knew right away that my time goal of 4:55 wasn’t going to happen, but I just stuck to my wattage goals and fought through the wind. I watched as other competitors flew by me on the hills, cranking out of their saddles up the steep hills. I kept track of their bib numbers, knowing I would see them again on the 2nd loop when their legs started to give out. Once I got to the turn around, the wind was at my back. I flew back into town, maxing out at 47 mph during some of downhills. After the first lap of the course I was in 4th place in my AG. I headed back out against the wind, still keeping to my power goals. As I got closer to the turn around I started to count the number of guys in front of me. I counted about 7 or 8 age groupers ahead of me. That’s the point where I knew that Kona might be within reach. At the turn around my legs still felt great. I kept waiting for the pain to set in, but it never did. I easily flew by some of the competitors who had cranked past me on the first lap. In the last 15 miles, I passed 2 people in my AG and came into transition in 2nd place in my AG. 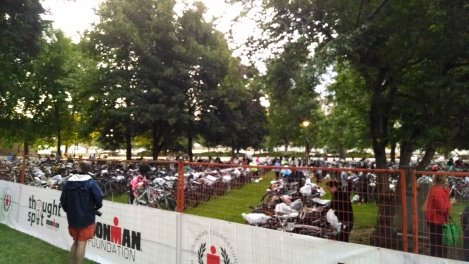 T2: I came into T2 still feeling great off the bike. Grabbed my gear back and headed to the change tent. I cracked a joke or two with some of the volunteers before heading out to the run course. 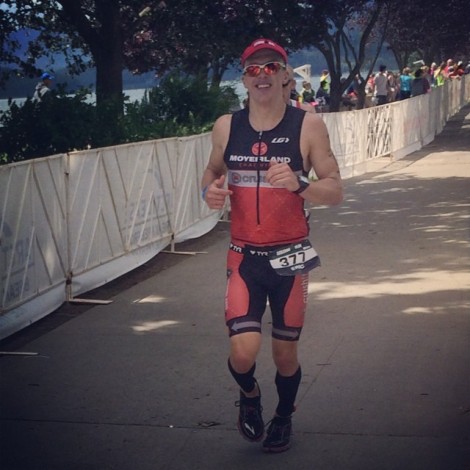 Heading out on the run

Run: I came out of transition with following just behind another guy. He was setting a pretty quick pace, so I let him go. People in the crowd kept telling me to chase him down, but I wasn’t worried because he wasn’t in my AG (about 2 miles later I would pass him anyhow). Mile 6 was the first real test of the day, a long climb. My goal was to keep my HR under 170. After running up the hill, you reach the turn around and have to go right back up the other side. I made it through that section still feeling pretty good. Coming back into town, I passed by the first place guy in my AG. I knew from here out it was my race to lose. Around mile 11-12 is where my legs started to fight back a little. I knew it would be a mental battle from here out. I did my best to just focus on the race one mile at a time. I just wanted to get to the next aid station where I was taking in water and coca cola every aid station, along with a gel every other. I started to feel cramping in my calves and hamstrings around mile 17. Each time I felt a cramp coming on I would slow my pace down to avoid it. This worked well. Mile 19 we had to run up the large hill again. I was able to pace off some of the competitors still on their first lap to get through it. Up until mile 25, I was just waiting for a cramp to take over, but it never happened. I managed to stay hydrated and took in 1 or 2 banana slices at each aid station. At mile 26, I made the turn down Sherman Avenue. The emotions hit me right away. The whole street was blocked off with thousands of spectators lining the streets. I asked a spectator if there was anyone directly behind me, but he said there was only a female pro. I wanted to enjoy the last .25 miles. I slapped high fives as tears rolled down my eyes. I heard Mike Reilly call out my name and I knew I had done it. I walked the last 10 steps, wiping away the tears from my eyes.

Post-Race: After a bit I managed to find my girlfriend and give her a big hug and kiss. Right after, I headed to the massage tent with chocolate milk in hand. After massage, we headed to Arbys for a greasy post-race meal. I headed back to the finish line to watch two of my training partners coming to the finish line.

Awards Ceremony: The awards ceremony was fun seeing all of the other age group athletes get their awards. Right after the ceremony was the Slot Allocation ceremony. This is where people claim their spots for Kona. They placed leis around your next, make you fill out some paperwork and then tell you to whip out your credit card. Expensive, but it will be worth the journey. 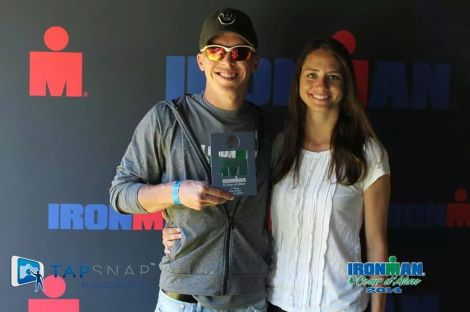 My girlfriend and #1 supporter

Thanks: I just wanted to say thanks again to everyone who has helped me get to this point. Especially my friends, family and girlfriend. Thanks to my coach for laying out such a great plan, to my friends/training partners Alex and Kayla, to the Heinz family for taking such good care of me all weekend, and to the city of Coeur d’Alene for putting on such an awesome event. The words of support and encouragement from everyone before and after the race truly means the world to me. I feel so blessed to have such great people in my life.

Up Next: Later this month I will be racing in the Door County Half Ironman. I took 8th overall last year and I’m hoping to top that this year. I may do some more Olympic, Sprint and Half Ironman races leading up to Kona in October depending on my schedule, there’s lot of weddings coming up this summer and fall.