After my first race in Minnesota, I am impressed with the triathlon community here. There was a great sense of camaraderie after the race and they race announcer seemed to know all the athletes, except me that is. Check out the small mention I had in the article below:

Sometimes races fall on yucky days. That was certainly the case last Saturday at the 10th annual Liberty Triathlons. Relentless rain and wind that made the cool temps feel even colder and a transition area resembled the Okefenokee Swamp were what 343 eventual finishers had to contend with.

More than 500 athletes had signed up for the races–half and Olympic. Unsurprisingly, many stayed in bed and of the slightly more than 400 who showed up, approximately 70 decided not to endure the one hour delay.

Naturally, most course records remained intact. None were reset in the Olympic race, but two fell in the Half, starting with Matthew Payne‘s incredible 4:02:46, which not only lopped close to five minutes off his 2013 CR, it will be debated whether it, or Kevin O’Connor‘s 4:02:59 turned in at Muncie in 1997, deserve to stand as the Minnesota men’s amateur Half IM record. Most 70.3 courses have suspect measurements. It’s hard to accurately measure that much real estate.

In any case, Matt’s effort was but another in a long list of course records he has set over the last few seasons. In 2014 already, he has crushed the amateur CRs at Oakdale, Buffalo Olympic and Liberty. We’re anxious to see how he fares at Best of the… 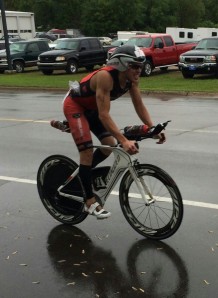 US on June 22, Duathlon Nationals in July and Tri Nationals in August. Twice his name has been part of the USAT discussion for US AOY Honorable Mention status. This year he may bypass the HM stuff and win the AOY award.

We were impressed with the performance turned in by 27-year-old Minneapolisian Eric Engel, who placed 3rd in 4:16:55. After a spot of research we learned that he is a tranplanted Wisconsinonian (Madison) and has some decent creds. He was 8th at Door County Half last year. We believe his 4:16 is a PR.

One response to “From MN Tri News: Sometimes It Rains…”