Last year’s IRONMAN Wisconsin champion, Ben Hoffman, won’t be back to defend his title. Instead he has his eyes set on competing at the IRONMAN World Championships in Kona. I had a chance to ask a few questions of Ben and get his thoughts on IRONMAN Wisconsin.

Before we go into the interview, let’s take a look back at Ben’s record breaking performance in 2012:

Ben Hoffman came out of the water in 52:33 which put him in 3rd place, 3:12 behind race leader Andres Castillo Latorre from Colombia. It only took until mile 42 of the bike course for Hoffman to overtake Latorre for the lead. Hoffman didn’t let off the gas. He set a new IRONMAN Wisconsin bike course record with a split of 4:37:58 (broke the old record of 4:42:29 set in 2010). Coming into transition, Hoffman had a healthy 10 minute lead on 2nd place. On the marathon portion, Hoffman never let anyone get within 9 minutes of him, surviving the final miles of the run while fighting off cramping to register the 2nd fastest run split of 2:56:34. Hoffman crossed the finish line with a new IRONMAN Wisconsin record of 8:32:51 (breaking the old record of 8:38:32 set back in 2010). After the race, Hoffman was quoted as saying “This was the most enjoyable IRONMAN I’ve ever done” 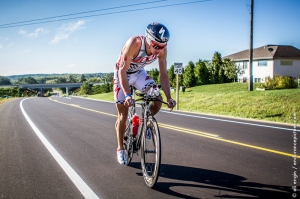 What makes IRONMAN Wisconsin different from other IRONMAN races you’ve competed in?

Hoffman: Ironman Wisconsin is truly one of my favorite all-time races, for many reasons. The crowd support from the local community is unparalleled, both in the downtown area, and Verona. The venue itself is spectacular: A challenging course, with a great tour of downtown and finish line by the capitol. Overall, the difference with this race is in the people that are involved with the race… they really make the difference by going the extra mile.

IRONMAN Wisconsin features a mass swim start (2,500 people). What are some of the keys to having a solid swim during an Ironman event?

Hoffman: As a professional, we don’t have the mass swim start to contend with, but I would recommend seeding yourself according to ability. If you know you aren’t going to swim under an hour, start a little back and let yourself build to the effort. Keep the heart rate under control at the beginning… it’s a long day!

IRONMAN Wisconsin is known for its’ tough bike course. What’s the biggest piece of advice you can give to a first timer taking on the bike leg?

Hoffman: Again for the bike course, pace yourself. There is no sense in blasting yourself on the first part of the bike course if you have to walk the marathon. The hills in Madison are basically unrelenting, so when you hit the two large loops, focus on keeping it steady and even. Take in your nutrition, and try to keep your efforts even on the uphills and downhills.

With the huge crowd support on the run course, it is easy for athletes to get over excited and forget their race plan. What are your thoughts on handling this?

Hoffman: I can’t stress pacing enough! It’s easy to get overexcited and run hard the first ten miles of an Ironman, but consciously hold back at the beginning. The crowd support is amazing in Madison, so really let them give you the energy you need on the second turn around on State St. and around the Capitol as you finish the race.

Overall advice for an athlete taking IRONMAN Wisconsin (or any IRONMAN) for the first time?

Hoffman: Biggest piece of advice is to enjoy yourself. The training we all do focuses on the single day of Ironman, so give yourself a chance to soak in the scenery, the energy of the crowd and other athletes, and the rhythm of your own body. When you enjoy something and stay positive, the experience is so much greater.

Thank you Ben Hoffman for taking the time out of your busy training schedule. Best of luck at KONA! Hope to see you back at Wisconsin in the coming years!

Nothing left to do but race. Start time tomorrow is 6:57am CST. I’m excited to test myself against some of the best age group athletes in the world.
2 more sleeps to go!
Who did it better? Me or @aaronrodgers12?
Discount Double Checked my way to back-to-back 70.3 Wisconsin wins.
I’ll be racing IRONMAN 70.3 Wisconsin this weekend (bib #2640) and looking to defend my AG title from 2019! Should be a fun day with the 140.6 and 70.3 on the same course! Good luck to everyone racing!
Snuggles with buddy
This is 34. I don’t usually get too worked up about my birthday each year, but the other day it hit me that I was turning 3-4. Let me preface with I know 34 isn’t that old and I still am relatively young, but it’s all perspective.
Who’s a good boi!?! 🐶
Solid training day in the books - check out my data on @whoop